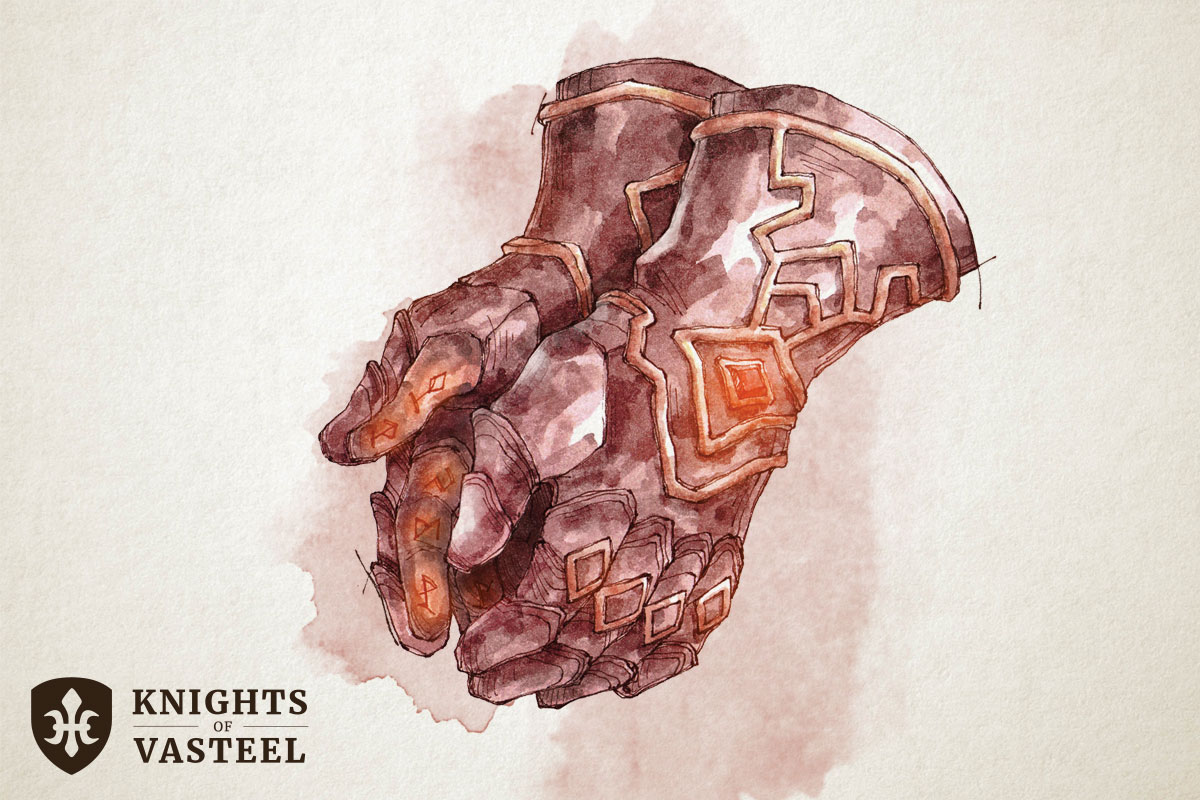 The famed Glyph Wardens of Dimlodir are renowned for their skills as scribes. They are often hired by royal courts and wealthy government leaders to create magical barriers of protection and defenses against assassination.

A Glyph Warden is nothing without their gauntlets. As their abilities grow, a warden will inscribe shorthand versions of powerful runes onto the hand of their gauntlets. With a touch the warden can stamp a prepared glyph onto any surface. The most crafty Glyph Wardens use clever combinations of glyphs to produce deadly effects.

These gauntlets have 5 charges, you can expend one or more charges to cast Glyph of Warding. The number of charges you expend determines the type of glyph you inscribe.

A creature must succeed on a DC 15 Intelligence (Investigation) check to spot your glyph. A creature that triggers more than one glyph, resolves their effects in the order the glyphs were inscribed. The gauntlets regain 1d6 charges every day at dawn.

Alarm (1 charge) – When triggered, an ear-splitting alarm begins to sound. The alarm lasts for 1 minute.

Alert (1 charge) – You are alerted when this Glyph is triggered. You can close your eyes and see the creature or object that triggered the glyph. This effect lasts for 1 minute.

Exit (1 charge) – This glyph lasts for 24 hours. It acts as the exit point when the Entrance glyph is triggered.

Blind (2 charge) – When triggered, the glyph emits a blinding ball of light that spreads in a 20-foot-radius Sphere centered on the glyph. Each creature in the area that has line of sight must succeed on a DC 13 Constitution save or become blinded for 1 minute. A blinded creature can attempt the saving throw again at the end of their turn until the condition ends.

Slow (2 charge) – The creature that triggers this glyph must succeed on a DC 13 Constitution save or their speed is halved for 10 minutes.

Explode (3 charges) – When triggered, the glyph erupts in a fiery blast that spreads in a 20-foot-radius Sphere centered on the glyph. The Sphere spreads around corners. Each creature in the blast must make a DC 14 Dexterity saving throw. A creature takes 5d8 fire damage on a failed saving throw, or half as much damage on a successful one.

Paralyze (4 charges) – The creature that triggers this glyph must succeed on a DC 15 Constitution save or become Paralyzed for 1 hour.

Entrance (4 charges) – The creature that triggers this glyph must succeed on a DC 15 Strength save or be teleported to an exit glyph of your choosing. This glyph has no effect if there is no exit glyph or the exit glyph has expired.

Gate (5 charges) – When triggered, you are immediately teleported from your current location to an open space within 10 feet of this glyph. If there is not an available space, the glyph has no effect.

This item can grow with a character as they learn and scribe more glyphs. Use the table below to decide what abilities the item has as it levels up.